The viticulture in the area of ​​today's estate Wilfersdorf goes back to the 14th century.

In 1136, Hugo von Liechtenstein was the first bearer of this name to be mentioned. He had named himself so after the Liechtenstein Castle, situated south of Vienna. In the centuries to follow, the family was able to expand their holdings considerably by acquisition, primarily in Lower Austria and in the South-Moravian territory. At the end of the 16th century, the three brothers, Karl, Maximilian and Gundakar, initiated a new era in the history of the family. Karl was elevated to the rank of Hereditary Imperial Prince in 1608, while his brothers were raised to the rank of Hereditary Imperial Prince in 1623.

Otto IV of Maissau bequeaths the Castle and Estates of Wilfersdorf to Christoph II of Liechtenstein on January 29th, 1436, with the consent of Duke Albrecht V of Austria. Among others, the testament mentions viticultural areas as “accessory” property.

This text from 1603 contains precise working instructions for the Wilfersdorf cellarer (administrator of the princely wine cellar). Prince Gundakar von Liechtenstein (1580 - 1658), who resided at Schloss Wilfersdorf at that time, personally supplemented and amended some passages of the concept: He added to the stipulation that the cellarer shall not cater for strangers in the cellar and shall not "bouse" with them (apparently a frequently done practice) the following provision: In case of contravention, he shall be "seriously punished" by the trustee (the princely chief officer).

Acquisition of the County of Vaduz 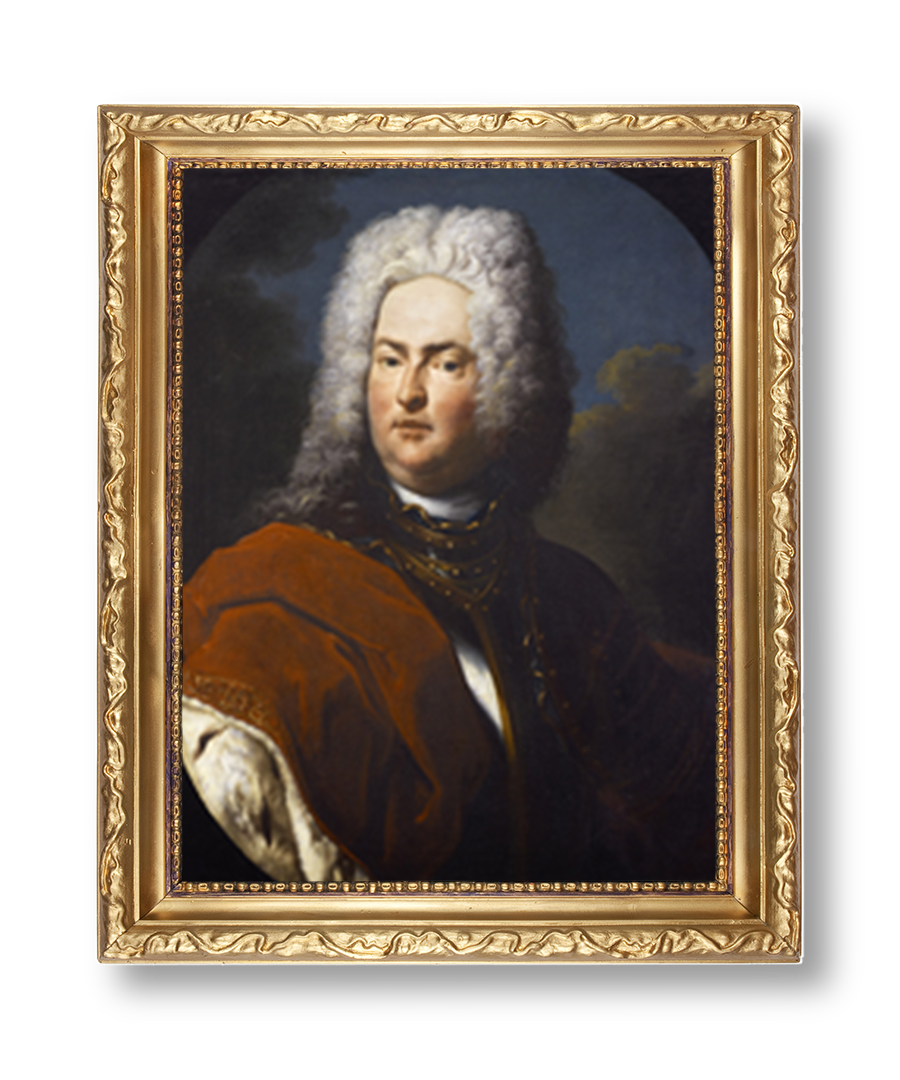 Ratification of the Contract of Purchase

of the Country of Vaduz by Emperor Charles VI

The purchase of the Fiefdom of Schellenberg and the County of Vaduz was ratified by Emperor Charles VI on March 7th, 1712. With the acquisition of the County of Vaduz, also Herawingert passed into the possession of the Princely House. Herawingert is doubtless the most traditional and most famous vineyard in the Principality of Liechtenstein, ranking among the best single-vineyard sites of the Rhine Valley. 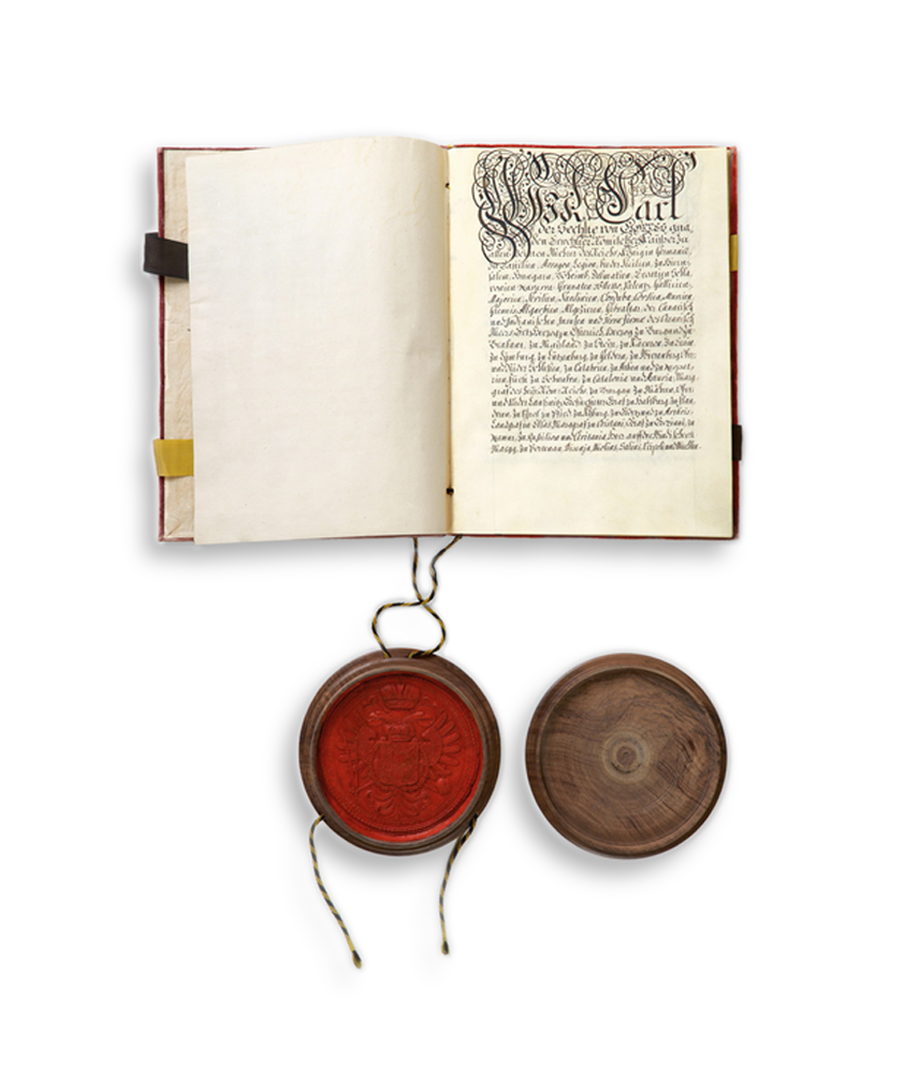 of the Estates in Wilfersdorf

The map of the Estates in Wilfersdorf also shows the locations of the vineyards. Until the 18th century, information on the Estates’ own businesses is rather vague and accidental. The revenues of the dominions were first precisely surveyed in 1751. At that time, the Estates of Wilfersdorf owned 61.5 yokes (35.4 ha) of vineyards. 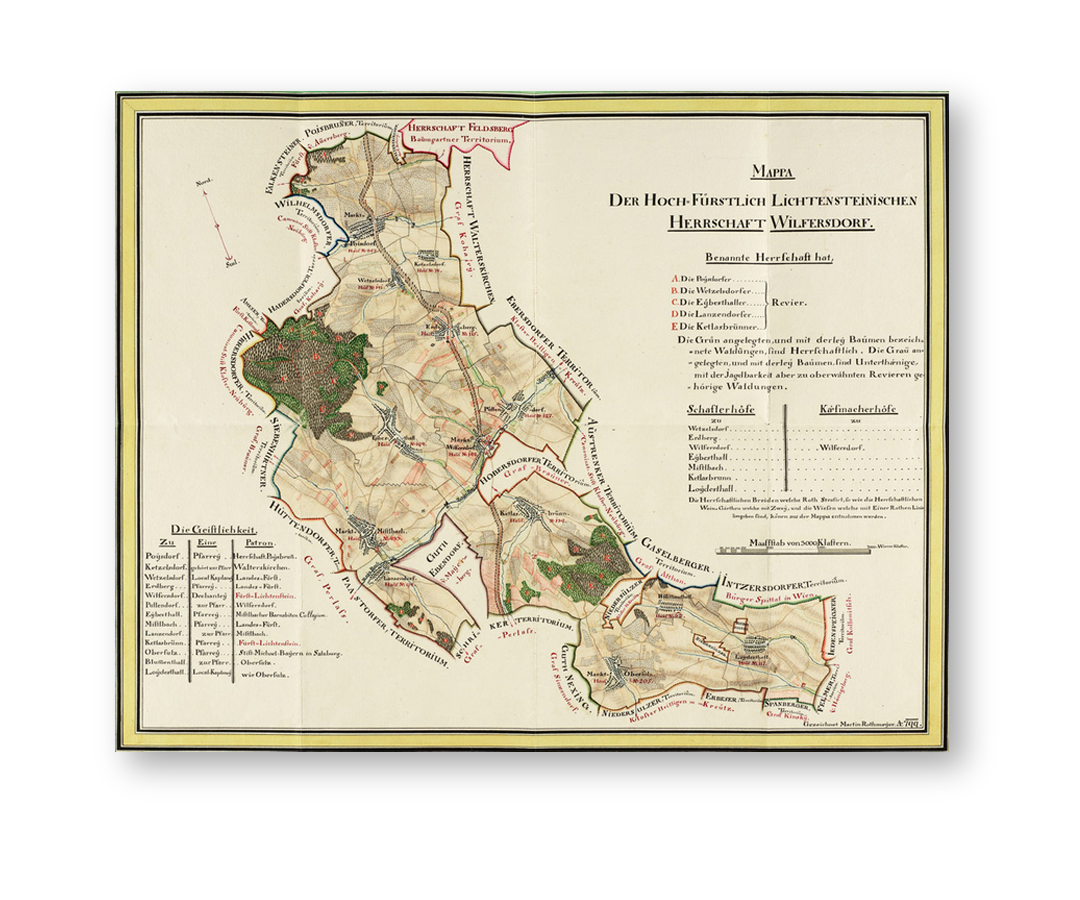 The "agrarian reform" of 1848 led to the omission of the so-called "Rustical" and hence to the liquidation of the domains. The property of the Princes of Liechtenstein, which was reduced to the former "Dominical", was combined into estates and reorganized. Consequently, the Wilfersdorf vineyards were recultivated in the 1860s. Until 1880, the autonomously managed areas under vine comprised about 11 yokes (6.3 ha) at the Wilfersdorf and Eibesthal Estates. By the direct takeover of property so far leased out, the portion of vineyards rose to 13 yokes (about 7.5 ha) by 1886. At that time, some 21 yokes (12 ha) of vineyards were autonomously managed by the Feldsberg and Herrnbaumgarten Estates. 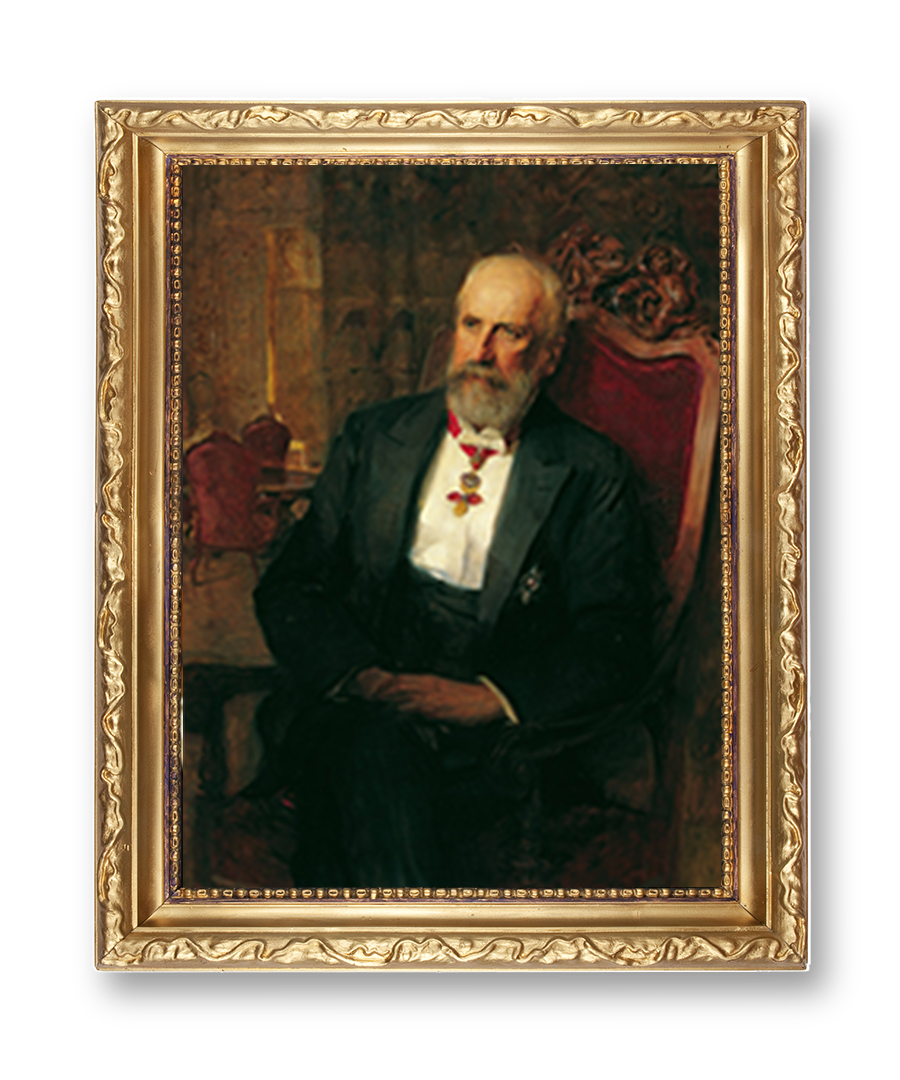 The Princely Wine Cellar in the 20th and 21st Centuries

Until 1945, winegrowing by the Princes of Liechtenstein primarily was centered around the area of Feldsberg (Valtice) in the Czech Republic. After 1945, the vineyards in Herrnbaumgarten and Hausbrunn in the Weinviertel formed the basis for the reconstruction of the princely wine estate. The domaine administration in Vaduz started to import and to distribute wines from Hofkellerei Wilfersdorf as early as 1956.

Following a generous conversion in 2011, the Domaine Wilfersdorf has united modernity and openness with centuries-old tradition in perfect harmony.

In Vaduz in the 1960s  the speciality restaurant Torkel moves into the former pressing room and after an extension the barrique cellar and the barrique room were perfect event locations.

STAY UP TO DATE